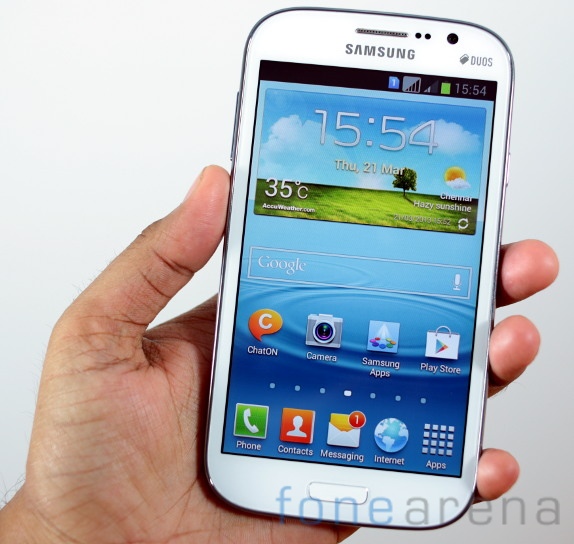 The box contents include the Galaxy Grand Duos smartphone, 2100 mAh battery, charger, stereo headset, USB data cable and a flip cover. The Galaxy Grand Duos has a 5-inch capacitive touch screen display at a resolution of 800 x 480 pixels and 186 ppi pixel density, which is pretty low. The display is bright but the colors are not vibrant. In the picture above, you can see the tiny RGB stripes on the display. There is a large ear piece above the display and a 2-megapixel front-facing camera. There are proximity and ambient light sensors on the right side. There is a Samsung branding below the ear piece and a Duos branding next to the camera.

There is a large home button below the display, which is usually common for Samsung’s Android smartphones. There are menu and back buttons on either sides. It runs on Android 4.1.2 (Jelly Bean) out of the box. There is a micro USB slot on the bottom. The 3.5 mm audio jack is at the top. It doesn’t have a secondary microphone which was present in the Galaxy S3. The Volume rocker is on the left. Power / Lock button is on the right. The device is 9.6 mm thick.

There is a 8-megapixel camera with a LED flash on the back. It is capable of recording 1080p full HD videos. The BSI sensor in the camera promises better images in low lighting conditions. Samsung promises zero shutter-lag, but there is a slight delay. There is a loud-speaker next to it. You can see tiny patterns on the plastic back, which is unique to the Samsung Galaxy Grand Duos smartphone. Both the Galaxy S3 and the Galaxy Note 2 have a shiny plastic back cover without any patterns.

The 8-megapixel auto focus camera takes nice shots. There are quick shortcuts on the left pane that lets you switch to either front or rear camera. There are on-screen options to change the flash settings, shooting mode, add effects and more. There are different shooting modes (Single Shot, Face detection, Panorama, Share Shot that lets you share photos to others via Wi-Fi Direct, Buddy photo share that lets you share photos with friends via face detection, Beauty and Smile Shot). You can shoot images with different effects including Posterise, Solarise, Green point, Washed out, Cartoonify, Sepia and lots more. There are different Scene modes including Portrait, Landscape, Sports, Party/Indoor, Beach/Snow, Sunset, Dawn, Autumn Colour, Text, Candlelight, Firework, Backlight and Night.

Other camera features include, enable GPS tag, option to adjust the white balance, exposure value, Metering mode and ISO. You can also change the image resolution (8MP, 6MP, 3.2MP, 2.4MP, 0.9MP or 0.3MP). You can also edit the shortcuts from the settings easily.